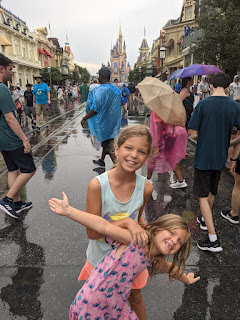 My family travels about two times a year on a family vacation.  We have been to all-inclusive resorts, parks, and cruises, but we have never been to Disney World. I wanted to share how we did it and what we would do differently next time.  Hopefully, you can learn from what we did and plan your own family trip.

We live in Pennsylvania and decided to drive to Disney with 1 night in a hotel on the day down and 5 nights at a hotel with two bedrooms while we were there. We stayed outside the park which was about a 5-minute drive-in. We bought a Hopper pass for my husband and two daughters that also includes a water park ticket the next day. We went to Disney Spring (The section of Disney you don’t have to pay to get in), and swam in the pool at the hotel on our off days.

We had an amazing time.  We got to get out of the house. When we were at the hotel we could relax in different rooms. When we go on cruises, we are near our kids for the entire trip. Yes, they went to kids club an hour or two a day but when your with your kids 24/7, the space was nice in a safe location.

We had a kitchen in our hotel so we bought cereal and got milk when we were down there.  We took a trip to the grocery store while we were there and bought ice cream treats, some fresh fruit, and a bathing suit since my husband forgot his!

Day 6- Hotel and Disney Springs We ate at the Boathouse

Day 7- Leave for the Drive Home

My husband and I both drove which was nice. He made a Spotify playlist with our favorite comedians, podcast, and music put together which made the trip go faster. He made sure the kids tablets were charged and had many movies on them for them to watch.  Also, they had their own set of headphone. Yes, one did break on the way so we picked up new ones at the gas station. When we stopped at gas stations my husband and I tried to pick high protein foods like meats and cheeses and of course coffee. 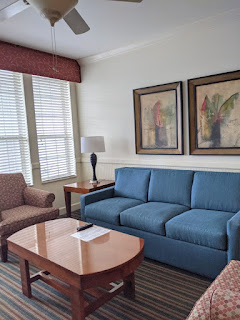 We stayed at TRU BY HITON-ORANGEBURG Georgia on the way down.  I was a software trainer 10 years ago that traveled around the country and use to love Hampton Inns.  Well, it seems that that chain is now 10 years older, and has a smell that I don’t like anymore.  I also really can judge a hotel by the caulking in the bathroom and they are not that great anymore.  I really like the TRU chain. They are more expensive, but for great water pressure (and white caulk), clean sheets, and a non-smelling room, it is worth it after a long drive and a drive the next day. We did not book this hotel until we drove down since we were not sure where we would stop for the night.  It was about $220 for the night and they did not have a pool which the girls would have liked. Next store we ate at a Cracker Barrel. 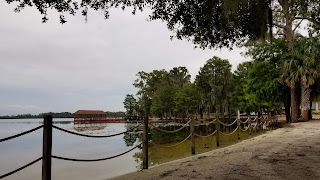 Grand Beach by Diamond Resorts was the hotel we stayed at in Florida. The hotel was about $150 a night here but had 2 bedrooms, 2 baths, a kitchen, a screened in porch and did not have a smell. We really enjoyed this hotel and would love to go back. The pools were very nice and I loved all the planting too. In Pennsylvania, I have some house plants but these same plants were planted outside and beautiful. The hotel is also on a lake which provided great views. They had mini golf there which we played until it was too hot.

We went the last week in July which was when my husband had off of work.  The temperature was in the 90s during the day and 80s at night. It also rained in the afternoon almost every day.  This was not the best time to go to Florida or Disney, but that is when we had.

Disney Spring was a fun place to look around at the stores and eat. We used the Disney App to Make reservations. We loved the TRex experience and we would not have gone to the Boathouse but really enjoyed it there.  We paid about $100 for the 4 of us including a tip for just a meal and no fancy drinks. 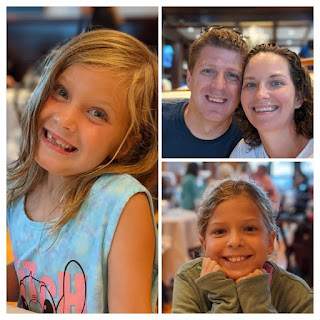 The Disney day was fun but long.  We got to Animal Kingdom a half hour before it opened and parked there which was $20. At Animal Kingdom we got right in the Flight of Passage Avatar ride which was about an hour wait time. We then went to the Na’vi river ride (40 minute wait time). We then ate lunch (not sure the name) in an outside area but the service was great. We ordered on the app and sat down.  The food came quickly. A bird ended up pooping in our drink and they gave us a new one quickly.

We then went to the Bugs Life 3d show and then Kilimanjaro Safaris which was about an hour wait. We saw the baby Rhino which was cute! 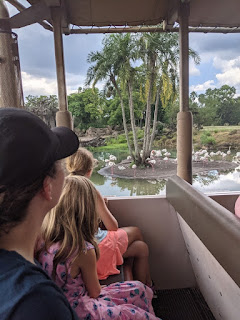 We then went back to our hotel and showered.  We then went to Magic Kingdom and waited out the rain. We could use the same parking pass. You need to take the monorail or boat into the park since it is far from the parking lot and we took the monorail which was one of my 6-year-olds favorite rides. We picked a restaurant there based on how close it was to where we were standing in the rain and what had a reservation. We ended up at Tony's Town Square restaurant which was all Lady and the Tramp Themed. This was nice since we just lost our dog during our trip. My husband does not usually eat at Italian Restaurants because of his gluten allergy, but they did an amazing job with that at Disney. He got a separate gluten-free dinner roll which he was very happy with.

We then went on two rides before the fireworks behind the castle. We went on the Little Mermaid Ride and the Buzz Lightyear ride. We sat for the fireworks for 20 minutes, then realized how tired we were from starting at the park around 7:30 at Animal Kingdom to 9:30 for the fireworks.  We did not have that great of a view since we did not find a seat early and wanted to make it back before all the people got on the monorail and then the parking lot. So we left early but it was a long and amazing day. 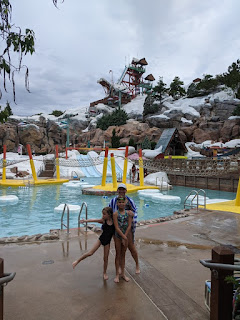 The next day we did blizzard beach. We all went around the very long lazy river and enjoyed that. The kids wanted to just swim and they allowed that. Our daughters are 6 and 9, so we had to switch on and off with the younger one because she did not want to try the bigger slides. The wave pool never stopped like at some other resorts we have been. This was neat but tiring! The slides are either fast, or you are on the ride for a while which is nice.  It rained on this day, so we took a break at the hotel.  When we got back the park was pretty empty without likes and it was cloudy which was a nice break from the Florida sun. 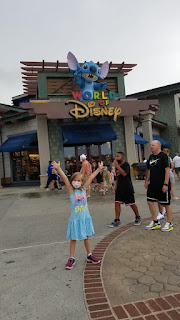 The Disney tickets we bought for 1-day park hopper and 1-day blizzard beach for 4 of us was $933. Since Blizzard beach is usually $70, that made the park day about $160 a person. Since we all went on 6 rides, it was about $27 a ride. There was also the experience of being there and the fireworks light show. They definitely have themed waiting for lines. We would have not bought park hopper passes for one day. We still had things to do at the one park. We also would not have bought the park and waterpark tickets together because you had to use them two days in a row, and we would have liked to rest one day in between. We bought the park hopper tickets for the fireworks but realized that made the day even longer.

Going during not peak crowds and heat would be best but again we only had that week for vacation.

We are used to going on cruises or all-inclusive where you pay everything up front. Dinners did become expensive but it was fun to eat at different places that we have not tried before.

We had a great time and would like to try a similar trip in the future. 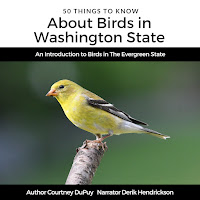 18 Ways Authors Can Promote Their Books 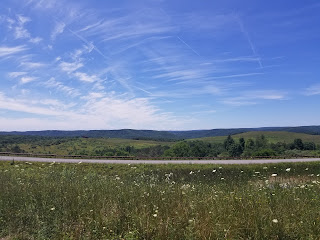 Greater Than a Tourist Books